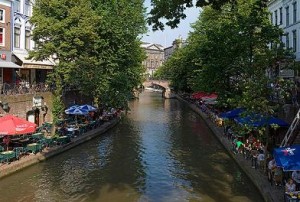 Oudegracht (The Old Canal) is a historic canal that flows through the center of the city of Utrecht in the Netherlands. It is one of the most famous and most beautiful canals in the country. It is easily accessible on foot from the central station in Utrecht.

Oudegracht begins in the south-eastern part of the city where are joining together the rivers Kromme Rijn and Vaartse Rijn, and where begins the original moat of the fortified town. Oudegracht then continues to the center of Utrecht. Part of Oudegracht follows the original course of the river Rhine, but it is not certain which part of it is.

The northern part of Oudegracht is probably older, it dates back to around the 10th century and connects the River Rhine with the River Vecht. The construction of the southern part began in 1122, but then the river level dropped due to the completion of the new dam in Wijk bij Duurstede. Exposed shores were then used to protect the city from flooding. Since 1275 the water level is stable.

Oudegracht form a vibrant center of Utrecht. It is alive on both sides. Here you can sit on numerous outdoor terraces and enjoy the unique atmosphere of the place, watching the ships and boats or take a walk around the water where you can find a quiet picturesque places in the shade of aged trees. Also such a night lit Oudegracht belongs to a very romantic experience.

You can explore the beauty of Oudegracht for hours from its banks, bridges or from the water. There are organized cruises and gondola cruises, or you can rent canoes or paddle boats.