Parque Warner Madrid (previously known as Warner Bros. Movie World Madrid and Warner Bros. Park) is one of the best theme parks in Spain, which is managed by Time Warner and numerous Spanish investment groups. It is located about 22 km from Madrid. 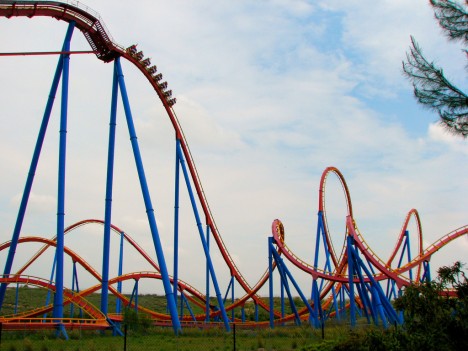 Parque Warner Madrid is suitable for all ages. It is divided into themed worlds, according to Hollywood models. You can find here DC Superhéroes World (become your favourite superhero for a few hours), Cartoon Village (meet your favourite characters in mad situations), Old West Territory (stroll down the dusty streets of the Old West), Hollywood Boulevard (Take a stroll down the magical streets of Hollywood) and Warner Bros. Studios (a real movie set with real live action).

The perfect solution for the lovers of adrenaline is the Super Heroes World. The smallest visitors will love the Cartoon Village. Among the most popular attractions is the roller coaster “Superman: la Atracción de Acero”, which has 7 inversions and is 50 meters high. Furthermore, there are other roller coasters “Batman La Fuga” with 5 inversions and “Stunt Fall” with 3 inversions.

Very interesting is also a wooden roller coaster “Coaster Express” which is located in the section of the park called “Old West Territory” (formerly known as the “Wild Wild West”). If you like free fall you should try “La Venganza del Enigma”. The three water rides belong to the best one in the category.