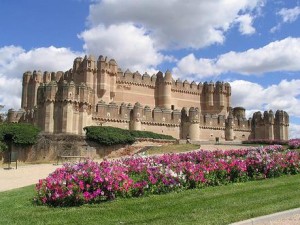 Castillo de Coca (or Castle of Coco in English) is one of the most beautiful medieval fortresses in Spain. It is situated on the southwestern outskirts of the town of Coca, about 55 km south of the city of Valladolid.

Castillo de Coca is preserved example of medieval architecture in Spain. It is located above the river Voltoya and is protected by a broad and deep moat, which has a length of approximately 560 meters. It was built by Don Alonso de Fonseca, Archbishop of Seville in the 15th century. Besides its advanced defensive system, Castillo de Coca has also very nice interior decoration. Here you find Gothic ribbed vault mosaics and various geometric motifs.

Castillo de Coca belonged together with castles of Cuéllar, Arévalo and Olmedo to a strategic fortification system. Thanks to the cleverly formed defence the castle was first occupied in 1808 by Napoleon’s army. In recent years, the castle was used as a forestry high school, but it is publicly accessible. Its main attraction is the decoration of the interiors and museum.