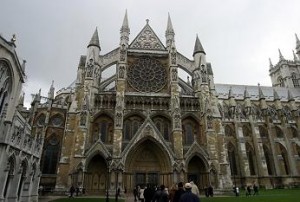 One of the sights of London that is sure to receive many more visitors than usual over the next year is Westminster Abbey.

Millions around the world watched on TV on April 29 when Kate Middleton made her way from The Goring (one of the most luxurious London Hotels) to the Abbey to marry Prince William. That historic day will have increased interest in visiting the building. Westminster Abbey has in fact been used for coronations and other royal occasions for centuries, so William and Kate were continuing a rich tradition.

Westminster Abbey was founded some time before AD624, and housed a community of Benedictine monks for its first few years. The present church was built in 1245 by Henry III, who was later buried there. The Abbey stood to be destroyed during the reign of Henry VII, for that fate befell most abbeys in his time. But he decided to grant it cathedral status, and spare it from being pulled down. Again in the 17th century it came under threat when it suffered damage at the hands of Puritans, but it survived mostly intact. Around 100 years later, the Abbey’s two western towers were built to a Gothic Revival design. It’s the history surrounding that makes it so unique and special, something even the finest of Dubai Hotels can re-create.

It is an important religious building, also known as The Collegiate Church of St Peter at Westminster, which saw parts of the King James Bible and the New Testament translated, as well as, more recently, the New English Bible.

Westminster Abbey has been used for the weddings of most of the royal family in recent times, the exception being Prince Charles and Lady Diana Spencer in 1981. Queen Elizabeth II, then Princess Elizabeth, married the Duke of Edinburgh at the Abbey in 1947. And it was only appropriate that Prince William, now the Duke of Cambridge, chose the Abbey to host his wedding this year.

Westminster Abbey has also been known as one of the sights of London for its use as the burial place of most of the Kings and Queens of England. Besides royalty, many of England’s finest poets are buried here, including William Blake, Lord Byron, Samuel Taylor Coleridge, John Keats, John Milton and Alfred Lord Tennyson. The Princess of Wales’ funeral was held there on September 6, 1997, watched by a huge TV audience around the world.