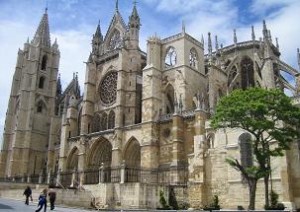 Santa María de León Cathedral is one of the most beautiful cathedrals in Europe. It is located in Spain, in the northwestern part of the country, in the historic city of Leon.

Santa María de León Cathedral was built of golden sandstone, in the Gothic style in the 13th Century. Master Cathedral architect was Enrique. It was built in the place where originally (in the 2nd century BC) stood Roman Spa, which was about 800 years later converted into a palace.

León Cathedral was completed in the 16th century. Today it is a wonderful building and since 1844 it is Spanish National Monument.

In León Cathedral you also find cathedral’s museum. You can see there La Virgen Blanca, which is a Gothic statue of the Virgin Mary. Then the treasury of the 16th century and the cloister decorated with frescoes by Nicolás Frances. Cathedral Museum is in the summer (July-September) open from Monday to Friday, from 9:30 to 14:00 and from 16:00 to 19:30. On Saturday it is open from 9:30 to 14:00 and from 16:00 to 19:00. Cathedral is closed on Sundays and public holidays.

But the museum is open all year round, however opening hours are changing, it is better to look at the official site of the León Cathedral. Basic admission fee is 4 €.