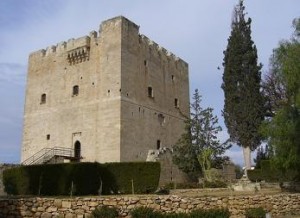 Kolossi Castle is a medieval fortress from the 13th century, which is located near one of the most important tourist resorts of the island of Cyprus – Limassol town. Here you can taste one of the most famous wines in the world.

Kolossi Castle was probably built already in 1210 by the King Hugh I of Cyprus, also known as the Knight Hospitaller who built the main residence here.

Later the castle became the center of the order of the Knights Hospitaller and Templar Knights. In the years of 1425-1426 the castle was damaged after a large invasion of Mameluke raids. In 1454 was at the place of original castle built a new castle. It was built by Louis de Magnac whose coat of arms can be still seen on the eastern walls of the castle.

In 1933 the castle was reconstructed. The castle is now open all year round and is accessible by a small drawbridge. Following the stone staircase it is possible to get to the roof of the castle, where you can enjoy a beautiful view of the surroundings.

Already in the days of knights the castle was a place of production of a delicious sweet wine known as Vins de la Commanderie, one of the traditional Cypriot brands.