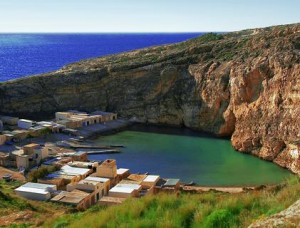 Lake Dwejra, also known as the Inland Sea, is located on the western coast of the Maltese island of Gozo. It is separated from the sea by the steep cliffs but connected by a narrow natural rock tunnel. Dwerja is a popular natural swimming pool with salt water and also popular place for divers.

This magnificent lagoon is one of the most beautiful places for scuba diving in the world and once you get there you certainly find out why. In good weather you can ask the local fishermen or use any boat service to take you through the tunnel where you can see the caves and dramatic cliffs, and two other natural attractions – The Azur Window and Fungus rock.

Azure Window is the famous natural rock arch, which towers majestically over the coast. The Maltese people call this, about a hundred meters long stone slab, which lies on two pillars, Tiega Zerga.

Another natural attraction is Fungus Rock – a cylindrical block of rock. Fungus Rock is currently uninhabited, but in the 17th century it was an extremely important site, because there is growing the specific mushroom with the Latin name Cynomorium coccineum, which have medicinal effects. The mushroom comes from North Africa, and this is the only place in Europe where such mushrooms grow. This can help in the treatment of stomach problems and hemorrhoids. It was used as an aphrodisiac and diminished bleeding. It has powerful disinfectant effects.

Knights of St. John guarded this rare mushroom very carefully, and who tried to steal it, was often sentenced to death. Between a rock and the mainland there were ropes and the mushrooms were transported to the mainland by cable cars. Coast guard tower Qawra was built on the island just to protect this site.

Between the Inland sea and Azure window there is a small chapel of St. Anne which was built in 1963 on the original site of the old church. If you continue further to the south along the coast, you find the Crocodile Rock.

During the years there were too many tourists coming to see Dwerja Inland Sea in Malta which contributed to the degradation of this place and left an impact on the environment.
However this site is really unique and probably doesn’t have a competitor in Europe.