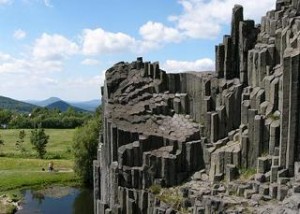 Panská skála (Herrnhausfelsen) a series of polygonal basalt columns rising dramatically from the uplands located near the town of Kamenický Šenov in the north of the Czech Republic.

Panská skála is the best known and most visited geological reserves in the Czech Republic. This natural formation is known also to geologists abroad. The rock is often called the “organ” because the five and six-sided columns of up to 12 meters long look like the structure of organ pipes. Its current appearance got Panská skála by mining, which took place here until 1948. This high quality basalt was exported to the Benelux countries, where they used it to build the dam.

In 1953 Panská skála became National Natural Monument. Under the rock there is a small lake, which was created after the mining and is filled with rainwater. The summit offers a stunning view of the The Lusatian Mountains (in Czech Lužické hory) and of the National Park of Czech Switzerland (České Švýcarsko).

At the foot of the rock there is the Marian Column, which was built in 1739 in memory of two people who froze to death here.