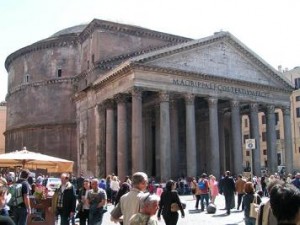 Pantheon (also known as Santa Maria della Rotonda) is a Christian church, located in the centre of Rome, in Italy. Pantheon was built by Markus Agrippa in 27 BC, and was dedicated to three Roman gods. Unfortunately in the year of 80 AD a big fire destroyed almost the whole building. Just after 45 years, in the year of 125AD, Emperor Hadrian made ​​extensive reconstruction. Under the reign of Pope Boniface IV. the Pantheon became a Christian church, which protected the building from burning and destruction, as it formerly was a pagan building.

The Pantheon is the resting place of Italian kings – Vittorio Emanuele II. and Umberto I. The Pantheon is marked as ingenious construction. In the middle of the dome of the Pantheon there is a giant circular opening through – thanks to its unique architecture – never rains inside the building. This opening serves as a sundial, and every noon sun shines on the front door of Pantheon.

Pantheon has, from architectural point of view, really very interesting ceiling. Elements of this architecture appear in the Vatican museums, and also in the St. Peter’s Basilica in the Vatican.

On the building facade you can see the same inscription as had the original building from 27BC: “M•AGRIPPA•L•F•COS•TERTIVM•FECIT” which means “Marcus Agrippa, son of Lucius, Consul for the third time, built this”. Pantheon has survived for centuries until today, and now it is the best preserved Roman building, plus permanent used.