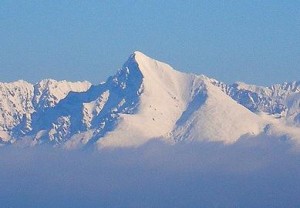 Kriváň is one of the highest peaks in the High Tatras Mountains and one of the most famous tourist destinations in High Tatras National Park. It is located in Slovakia near the Polish border, in the region of Prešov. Its elevation is 2494,7 m. Several ridges begin on this peak. The best for hiking are the most southern and southwestern ridge. South ridge runs across Daxner’s saddle, Small Kriváň and ends at Nad Pavlovou Hill.

Southwest ridge runs across two apparent elevations – i.e. Upper and Lower Priehyba – and ends in afforested Grunik. These routes belong to quite difficult and challenging hikes in the High Tatras and require some physical and technical prowess. The part of the route is fixed and secured with chains. Kriváň peak offers beautiful views. You can see almost the entire ridge of Low Tatras, West Tatras and the Red Hills to the northwest.

Kriváň is not even among the 20 highest peaks in Slovakia (but 27th). But its magical silhouette with noticeably curved top, after which is named, attracted poets, painters and ordinary people since beginning. Lots of myths and legends exist about Kriváň. In the past, it was a symbol of strengthening of the national pride and identity, sometimes abused for political goals.

This massive peak became a symbol of Slovak national consciousness and in 2005 it was decided that it will be displayed on the back of the Slovak euro coins with a face value of 1, 2 and 5 cents.