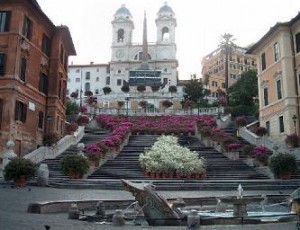 Piazza di Spagna is a square situated at the foot of the hill Pincio in Rome, Italy. Originally, only the southern part of the square had such name. The northern part was called the Piazza di Francia. This name was given according to Palazzo di Spagna, which since the 17th century was the seat of the Bourbon Spanish Embassy to the Holy See (Embassy is now located in Palazzo Monaldeschi in the piazza below).

In front of the palace you can see a column of the Immaculate, which was built in 1856 by Pope Pius IX. to commemorate the dogma of the immaculate conception. The column dates back to the ancient times, it was found in excavations in 1777, under a monastery. It is now topped with a statue of Virgin Mary.

On the south side of the Piazza di Spagna there is the Palazzo di Propaganda Fide, the seat of the Congregation for the Evangelization of Peoples.

In the middle of the Piazza di Spagna rises Fontana della Barcaccia built in 1629 by Pietro Bernini. From this fountain you can step up Baroque Scalinata della Trinita dei Monti (the Spanish Steps), which were built in the years 1723-1726 at the request of a French diplomat Stephen Gouffiera. The architects were Francesco de Sanctis and Alessandro Specchi. The elegant staircase consists of 137 steps and has an irregular albeit symmetric structure. It is beautiful especially in May, when it is decorated with azaleas. The steps are usually very crowded; it attracts tourists as well as locals who use it as a gathering place.

Stairs lead to the French church Trinita dei Monti, built from 1495 to 1585 with the support of the French kings. In front of the church you can see the obelisk of 1788 which is the smallest of Rome’s obelisks. It is an ancient copy of Egyptian original, which formerly stood in the Gardens of Sallust.