Poulnabrone Dolmen – the most photographed megalithic monuments in Ireland 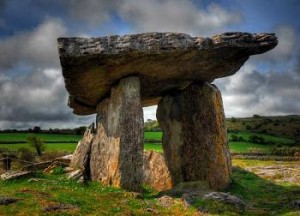 Poulnabrone Dolmen, one of the symbols of the Emerald Isle, is probably the most photographed megalithic monuments in Ireland. This “hole of sorrows” is located in the western part of the country, in the Burren, County Clare. It was built during the Neolithic period, approximately in 3200BC.

Poulnabrone Dolmen is a portal tomb, which consists of a huge stone boulder weighing 5 tons, that is supported on two sides by raised stones. The entire formation is a 9 m deep burial chamber whose entrance is turned over to the east. Thus gives the impression that it was used as a sacrificial place in the Celtic period. This mysterious place is most impressive at sunset, when setting sun is lighting surrounding field with clearly purple color.

Archaeological research in 1985 showed that there were buried about 16 to 22 adults and 6 children, including personal belongings of deceased, as it was believed that the deceased needed them on their way to the next world. There were found such as bone pendants, ceramics, quartz crystals, weapons, and stone axes.

As regards natural conditions, vegetation in the Burren area is very poor and there is not enough soil. In the tomb Poulnabrone there is only about 25 cm of the soil and below it there is only a rock. The method of burial is still unclear. The bones of the bodies were separated from each other.

Poulnabrone Dolmen is situated on the R480 road, about 9 km south of the town Ballyvaghan. Admission is free. In the vicinity there are about seventy other tombs.