Vilnius – Baroque city and the capital of Lithuania 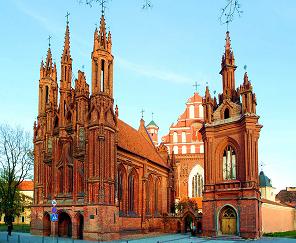 Vilnius is the capital of Lithuania. It lies about 90 km from Kaunas, far inland on the river Neris, just a few kilometers from the Belarusian border. The city has about 585,000 inhabitants. It’s a major road and rail junction. It is important agricultural and machine tools producer, as well as electrical equipment, textiles and chemicals.

In Vilnius you can see the castle ruins, mosque, synagogue, and almost 40 churches. Old Town and the Cathedral Square form the heart of Vilnius. Three bronze statues on the shield of the cathedral are Saint Casimir on the south side, Saint Stanislaus on the north and Saint Helena in the centre. Chapel of Saint Casimir, located at the side of the ship was built in Baroque style. The tomb of Alexander Jagiello – Grand Duke of Lithuania, is located below the chapel.

It is very easy to get lost in Vilnius thanks to the dozens of narrow streets and a number of squares. Thus you can miss some of the most architecturally interesting buildings, such as the church in the shape of a pyramid. The old Jewish quarter, ghetto, the presidential palace, the university and the observatory are among other city’s sights.

The presidential palace was originally the residence of general governors, in 1812 the residence of Napoleon and after his expulsion it was a residence of Marshal Kutuzov. University areal consists of several buildings, including the church, which are interconnected by courtyards.

Magnificent example of Lithuanian Gothic architecture is St. Anne’s Church from the 16th century. Next to it there is a church of the Bernardine Monastery from the same period. In front of this complex there is a statue of Adam Mickiewicz (Polish-Lithuanian poet, publisher and political writer of the Romantic period).

You can pass through one of eight city gates which are remainings of the city walls, which dates from the 16th century. If you get off the Hill of the Three Crosses, which still commemorates three monks that were allegedly tortured to death here, you will obtain a beautiful view of the city. More to the west, lies the new town, where you can find City Hall. In the past, it housed the Gestapo, then KGB and now it houses the Museum of Genocide of Lithuanian nation.

Less than thirty kilometres north of the city there is the geographical middle of Europe, which was established by the French National Geographical Institute. This centre symbolizes the pyramid, which contains the names of all major European cities and their distance from the center of Europe.

Vilnius was European Capital of Culture in 2009, together with Linz (Austria).