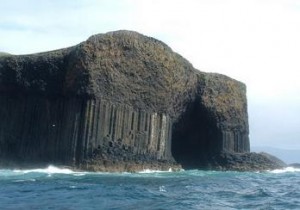 Fingal’s Cave is a fabulous, partially underwater cave created of basalt. It is located on the island of Staffa in the Inner Hebrides islands, only 30 km from the western coast of Scotland. Fingal’s cave with its basalt columns can certainly belong to the most mysterious places of the world. The entry to the cave is high like a five-floor house. Cave is around 70 meters deep, 69 m long and 7-13 m wide.

Fingal’s Cave was discovered by an English naturalist Sir Joseph Banks in 1772, during his expedition to Iceland. However the cave was known much earlier and is surrounded by many legends.

It is available either by ferry from the nearby island of Mull, or from the Scottish mainland.