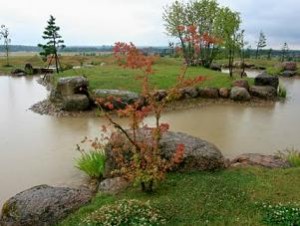 Mažučiai (Madzuchai) is a village in Lithuania, lying in the district Kretinga, 3 km west of Darbėnai. However the village has only 23 inhabitants it is world-wide known for the largest Japanese garden in Europe.

The creation of this Japanese garden started in 2007 by Šarūnas Kasmauskas in collaboration with the architects of Japanese gardens from Japan (e.g. Hadžime Watanabe, Hiroshi Cunoda…) and is still in progress. The works slowed down considerably sudden economic crisis in 2009. The largest Japanese garden in Europe (16 ha) will be called the Valley of singing stones (Lithuanian Dainuojančių akmenų slėnis). It is located on a hill musicians (Lithuanian Musicians kalnas), the highest hill in the area (its altitude is 32.4 m above sea level). During the establishment of a pond on the hill, a total of 24 springs have been revealed.

The project has no official sponsors yet, nor by the European Union, nor by the Lithuanian State. All funding is coming from the owner – S. Kasmauskas, his family and from charitable donations.

Japanese gardens are one of the important aesthetic elements of Japanese culture. Impress even those that are not closer interested in the culture of this country. The rules of their creation have been developed almost a thousand years. Although the western style gardens are very different, they attract anyone who has a sense of beauty.