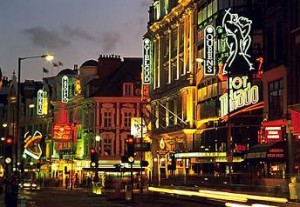 When it comes to entertainment, London is rightly famous for the West End theatre district, with a whole host of outstanding plays and musicals playing six nights a week. Classical music and opera is also hugely popular in the capital, at venues like the Royal Opera House, the Coliseum, the Royal Festival Hall and the Barbican.

But another of the great entertainment options in London – and one you may not know too much about – is comedy.

Britain has produced many famous stand-up comedians over the years, and in London you get the chance to see them in action. The most famous comedy clubs in the capital include the Comedy Store, between Leicester Square and Piccadilly Circus, and Jongleurs in Covent Garden. Both have featured on TV numerous times.

Jongleurs, for example, has hosted TV shows from the likes of Steve Coogan, Jack Dee and Lee Evans. The Comedy Store is where the likes of French & Saunders, Mike Myers and Ben Elton cut their teeth.

The best way to find out which comedians are appearing at which venues is Time Out, the famous London listings magazine which is now also available online. The site gives details for all shows at venues like the Leicester Square Theatre, Hammersmith Apollo, Bloomsbury Theatre, Comedy Café as well as the comedy clubs on the outskirts of the capital.

If you’re a newcomer to the London comedy scene, it’s a good idea to check out the Critics’ choice section of the site where experts give their tips on shows you just have to see. And you can buy tickets for the shows with just a few clicks, too.

The best London hotels will have a concierge service where you can buy tickets for comedy, theatre and music concerts.

Comedy clubs are rarely discounted, but tickets are not that expensive. If you want to see a top West End show, on the other hand, you may well be able to get a half-price ticket from the well-known discount booth in Leicester Square.

To get the best deals on hotels around London, you can visit sites like www.expedia.co.uk, booking.com or lastminute.com.