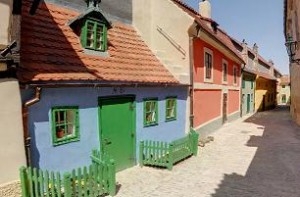 Golden Lane (or Zlatá ulička in Czech) was created after the construction of the northern ramparts of the Prague Castle, in the 16th century. The area of northern moat was used to build decent homes, which are now the last remains of the small-scale architecture from the Middle Ages and the Renaissance in Prague Castle. The houses were homes to the castle servants, e.g. goldsmiths or the castle marksmen and various artisans.

Houses were occupied until the Second World War, but the area was protected already for several years, and no changes which would change the character of the street or houses were allowed. The writer Franz Kafka lived here in the house no. 22 between 1916-1917. The last owners and the tenants moved out in 1948, and despite of receiving high quality houses, they left with protests.

Golden Lane was reopened to the public on 1 June 2011 after one year of reconstructions. It is probably the most romantic and famous part of Prague Castle. You can access the Golden Lane if you buy a ticket for a Long (350 CZK) or Short (250 CZK) Tour around the Castle.

You can take really interesting Virtual Tour by visiting the following website:
https://virtualni.praha.eu/nocni/zlata-ulicka.html