Piazza Navona – most beautiful and busiest square in Rome | Italy

Piazza Navona in Rome is considered by many as the most beautiful square, not only in the capital of Italy, but throughout the world. This bustling area, having the shape of an ellipse, shows two thousand years old history of Rome to its visitors. It copies the original stadium Circus Agonalis, which was standing here in ancient times. 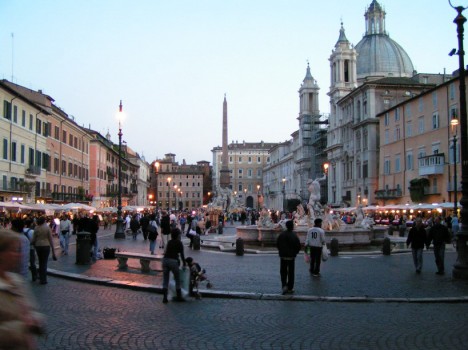 The stadium was inaugurated by the Emperor Domitian in the year of 86 on the occasion of the Games in the Greek style. At the time of its completion could carry up to 30,000 spectators. In 1377 the current Pope began with a large urban development of this area. Later in 1477, Pope Sixtus IV moved the Central Market here, which operated for 390 years long. Even today you can see the traditional Christmas markets with toys and Christmas decorations here.

Square undergone the greatest change in 1644, when Pope Innocent X. initiated an extensive program of turning the city into Baroque style. And it was nothing else than Piazza Navona that he took for his new family residence. His plan was to build up a fountain and the church, and it was done within the next ten years.

Beautiful baroque square Piazza Navona is now a big tourist attraction, it is full of visitors during the day as well as night. In the shadow of the beautiful works of art you can sit for a cup of coffee, enjoy a glass of wine or enjoy some of Italian great specialities. 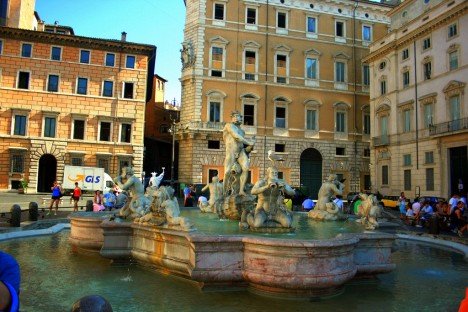 Among the most important monuments in the square include two magnificent fountains made by sculptor Bernini. At the southern end of the square is the Fontana del Moro (Fountain of the Moors), which construction started by Giacomo della Porta, but was finished by Bernini.

In the middle of the square you can see the Fontana dei Quattro Fiumi (Fountain of the Four Rivers), showing the four rivers, as symbols of the four continents known at that time. In each corner is a statue of the man, that represent four different rivers (Nile in Africa, Ganges in Asia, Danube in Europe and Río de la Plata in America. The fountain was completed in 1651. In the northern part of the Piazza Navona is another smaller fountain – Fontana del Nettuno (Neptune fountain), which is another work of the sculptor Giacomo della Porta. 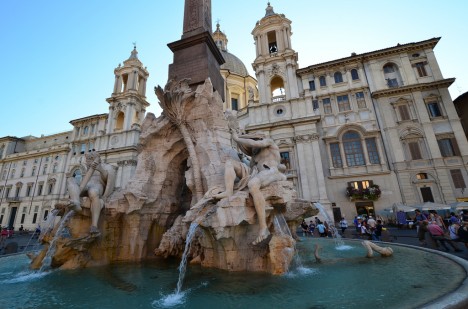 A beautiful monument is also the Church of St. Agnes (Sant’Agnese in Agone) standing on the west side of the square. It was built on the place where the Saint Agnes was martyred. This only thirteen years old Christian girl was stripped naked on the square because she did not want to marry a pagan – the son of a Roman official. But according to the legend, a miracle happened as she prayed, her hair grew and covered her body.

Agnes was, however, later in 304 AD, executed by Diocletian during the persecution of Christianity. The church now boasts façade from 1653, which is the work of Bernini’s big rival, Francesco Borromini.

In the neighbourhood of the church is one of the many palaces of Innocent X., spacious Palazzo Pamphili with 1,000 rooms, which is currently occupied by the Brazilian embassy. In one part of the palace is private art collection of Pamphili family, which belonged to the most patrician families in medieval Rome. Pope Innocent X was an important member of this family.

Piazza Navona is now a popular place for street artists, painters and musicians. In the evening the square comes alive with tourists and one can have a unique opportunity to experience a typical Italian night.