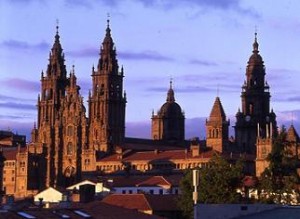 Santiago de Compostela is the capital of the autonomous Spanish community of Galicia. It was founded at the turn of the 4th and 5th century. According to legend, the body of the executed apostle James was brought here from Holy Land for burial. After the year 813, his tomb became a symbol of Christian Spain, and then the basilica began to build over these relics. Over time, this reputation has exceeded the boundaries of the country and gained importance. Santiago de Compostela became a destination for Christian pilgrims throughout much of Western Europe. In 1985 the town was inscribed on the UNESCO World Heritage List.

The basilica, which was built over the grave of St. James grew into Cathedral, which is now the most important monument in the city. The Cathedral was rebuilt into Baroque style in 18th century, which changed its original appearance. The cathedral has a magnificent Romanesque interior façade Portico de la Gloria, which was created by the Master Mateo in 1188. Inside you can see a beautiful Mondragon chapel from the 15th century, the main altar, crypt with the relics of St. James, or a museum of paintings, retables, reliquaries and sculptures.

It is a perfect example of sacred Roman architecture. Cathedral of Santiago de Compostela became the destination of the Way of St. James, a major historical pilgrimage route since the Middle Ages, which total length is 1600 km. The journey starts in France and leads through the Alps to Santiago de Compostela. Only in Spain it goes through seven provinces, four autonomous regions and around 200 villages and towns.

A history of the pilgrimage dates back to medieval times and its symbol is the scallop shell, which can be found at every step. Believers go this long journey for centuries and is important for them to repentance and spiritual cleansing. Along the roads were built hostels, shelters, hospitals, churches and cathedrals, which were designed to serve the pilgrims. Then many cities around grew up that have prospered largely from the influx of pilgrims.

Also now, there are always thousands of people each year, however not all of them for religious reasons. The pilgrimage has become a renowned tourist attraction, where you can enjoy the beautiful and the changing landscape, to know the local traditions, people and architecture. Suitable for visiting the city is 25 July when the celebrations of St. James are held here and it is also the National Day of Galicia. In 1993, also the St. James pilgrimage has been added to UNESCO World Heritage Site.

The historic city center is full of stone streets. Together with surrounding squares it is now a pedestrian zone and you will find most of the sights here. Since there is an important Spanish university, the city is full of students. Popular tourist place is the Zona Vieja (Old Quarter), which is full of bars, restaurants, clubs and discos.

The southern part consists of the square Praza de Galicia, where you’ll find baroque cathedral Catedral del Apóstol from 18th century. You can also visit the museum of pilgrimage Museo das Peregrinación situated near the cathedral. Art lovers should not miss a visit to Centro Galego de Arte Contemporánea with the exhibitions of modern art.