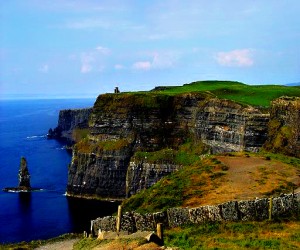 Ireland is a wonderful location for a holiday, but there remains one fundamental problem.

Though flying to the Republic of Ireland or Northern Ireland is a good option, it will probably then mean a battle to get around the country.

For many people, not least stag parties, Dublin is their favourite destination in the Republic of Ireland. And the capital not only has many attractions but has a good transport system.

So anyone intending to limit their Irish holiday to a weekend in Dublin will not be inconvenienced by not having a car, if they choose to fly there.

There is an excellent bus service in Dublin, and if you wish to travel north or south of the city centre then it is a good idea to use the Dublin Area Rapid Transit. That is an electric train service which runs from Howth in the north to the lovely seaside town of Bray in the south.

Flying into Dublin Airport is a pleasant experience, just a short hop from Great Britain, and you can then take Aircoach into the city centre.

However, Ireland has such wonderful towns and countryside that it is a real shame to limit your time in Ireland to just Dublin. Plus Dublin Hotels, food and attractions are expensive – as you would find in any capital city – so if you’re planning on staying in Ireland for a bit longer, it pays to spread your wings and explore other, more cost-effective parts of the country.

However, those who want to explore Ireland will find that the Irish rail system is not the best. It is possible, though not speedy, to get to lovely towns like Limerick and Galway by rail, but the best way to get around is by car. You can then choose to stay away from city centres, where you find cheap hotels, as opposed to the pricier establishments closer to the centre that are designed to trap those tourists who are unable to stay anywhere else.

Car hire in the Republic of Ireland, however, is generally not as cheap as in the U.K., which can add considerably to the total cost of your trip.

Definitely worth considering is the option of taking the ferry to Ireland. However, depending where in the U.K. you live, that can involve a lengthy drive.

Ferry connections between the two countries, via the Irish Sea, are available from Holyhead, Birkenhead, Doughlas, Stranraer, Cairnryan, Troon, Swansea, Fishguard and Pembroke.

View Travelling around Ireland in a larger map