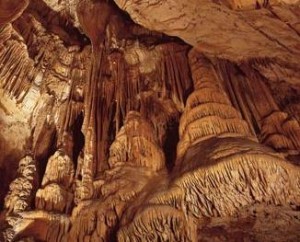 Jasovská cave (or Jasovská jaskyňa in Slovak) is located in the Slovak Karst, near the village Jasov, in the south-eastern part of the Slovak Republic. The cave has been known since time immemorial. There were found artifacts from the Paleolithic, Neolithic and Hallstatt periods. The stalactite cave was first open to the public partially in 1846 by monks from the nearby Jasov monastery. Between 1922 – 1924 the lower parts of the cave were discovered and already in 1924 Jasovská cave was officially opened.

There were built routes and electric lighting. The total length of cave is 2811 meters, of which about 550 meters are available to the public. Jasovská cave has a rich sinter decoration. You can admire Virgin stalactites and waterfalls. At the top floor there is also interesting sign written in black letters in 1452 and which talks about the victory of the Hussites in Lučenec.

The cave is a home to 19 species of bats, which live in the cave especially during winter. Since 1995 Jasovská cave is included in the UNESCO World Heritage list as a part of the Caves of Aggtelek Karst and Slovak Karst site.

For further information you can visit official website of Slovak caves www.ssj.sk.

« Travelling around Ireland
Adare – the most beautiful village in Ireland »