Bodiam Castle – the most romantic place in the United Kingdom 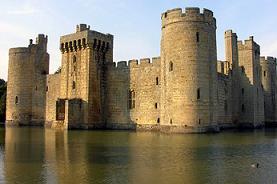 In the county of East Sussex in south-eastern part of England, you can find allegedly the most romantic place in the United Kingdom. It is a magnificent Bodiam castle from the 14th century, which is surrounded by the gleaming moat. Around it lies a beautiful green park inviting to walk, sit and picnic.

Bodiam castle is situated in the undulating countryside of southern England and was originally built as a protection against possible invasions of French during the The Hundred Years’ War. However French army has never come here. So today, more likely version is that the castle was built by Sussex Knight as his headquarters. The castle was inhabited until the 17th century, when it was during the civil war (which began in 1642), damaged in an attack by parliamentary troops. The roof has been destroyed which made it useless and non-recoverable. In 1664 thus became unoccupied and remained abandoned.

Fortunately, thanks to the sandstone, which was used as its building material, it has withstood the ravages of time and remained preserved until today. In 1919, Bodiam Castle was restored by Lord Curzon, who later gave it to the state.

Now the castle is open to the public and is one of the major attractions of the region. From the outside it looks perfectly intact and you will find also impressive interior remains which show you how the castle was equipped.