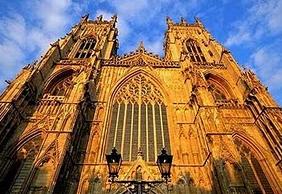 The ancient city of York is a place teaming with history at every turn. Centuries of Emperors, Kings, wars and invasions have given the city a fascinating and layered past that is just begging to be explored.

The Romans founded the city in 71AD, naming the fortress town on the banks of the River Ouse Eboracum. It quickly became one of the most important cities in Roman Britain.

The name York came from the Viking word Jorvik, following their capture of the city in AD886. Even beyond the time of the Vikings York’s position by the Ouse and on the key trade route between London and Edinburgh meant is became a major transport hub.

Although this slowly declined thanks to the rise of Hull to the east and Leeds to the west, the rise of the railways saw a revival in the city’s fortunes in the 1800s and in the modern era tourism and a reflection on its eventful and often grizzly past now dominates its economy.

Tourist attractions include York Minister, the largest Gothic cathedral in northern Europe, which is located in the city’s heart. The labyrinthine York Castle and the city walls also point to its ancient past.

The ‘snickelways’ and ‘shambles’ are two excellently preserved examples of the small, winding medieval streets of yesteryear, containing an array of shops and food places to while away an afternoon or two.

There are numerous museums and galleries to satisfy your culture fix with the Yorkshire Museum, Jorvik Viking centre, the National Railway Museum and the York Art Gallery amongst others. The Theatre Royal, Grand Opera House and Joseph Rowntree Theatre also mean your evenings are well catered for too.

As it is a town centred on tourism it is no surprise that accommodation-wise York has enough to satisfy all tastes and budgets. This ranges from basic accommodation found at the City’s University to the luxurious Royal York Hotel, comparable with the finest London Hotels or Dubai Hotels.

The kaleidoscopic clientèle from affluent tourist to impoverished student also means there are varied eating options available, from budget cafes, traditional pubs and quaint tea rooms to the height of luxury and fine dining.

Many visitors to England struggle to make it beyond the boundaries of London, and if they do it usually isn’t to venture north. However, those that do head to York will be rewarded with a city that offers all the charm England can offer with the facilities to meet the needs of even the most picky of tourists.