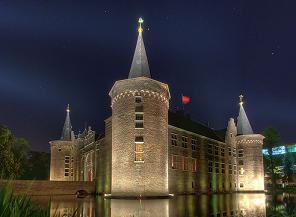 Helmond Castle is well preserved medieval castle in the town of Helmond, in the Netherlands. Helmond Castle lies about 15 km east from the city of Eindhoven.

Helmond Castle is everything you expect from a visit to the typical medieval castle. All archaeological treasures, replicas, guns, tools, pictures, paintings and other historical items that you can see here, will give you the opportunity to have a concrete idea of ​​life at the Castle Helmond. In combination with the view of this picturesque castle, your visit gets an unforgettable experience.

Helmond Castle has a square floor plan, in the corners there are rounded towers and is completely surrounded by the moat. There are other similar castles in the Netherlands, for example Ammersoyen Castle, Muiden Castle and partially preserved Radboud Castle. Helmond Castle’s walls are only 1.3 meters wide, therefore the castle has originally a double moat. This kept cannons during a possible attack at a safe distance from the castle.

Helmond Castle also serves as a museum, which is located in the basement of the castle. You will find here something about the history of the castle and the city of Helmond and art gallery.

Helmond Castle was built around 1420 by the family Van Berlaer to replace their former castle. This, originally wooden fort, was already built in 1350 and its remains were found during the excavation about 250 m southwest of the castle. In 1549 Helmond Castle was strongly damaged by fire. During The Eighty Years’ War the castle was on the side of Spain. The castle was under siege several times in its history, in 1581 even by the government troops. Although the city of Helmond was conquered, Helmond Castle was not, so the army had to leave the town.

In 1587 the soldiers came back again, but the castle remained unconquered again. Thus, despite the thin walls, Helmond Castle was very well situated from a military point of view. In 1602, however, luck turned. The castle was besieged by the government troops under the command of Prince Maurits. He used six cannons. All 45 soldiers at the castle was forced to surrender. All those sieges caused many damages. In 1603 the castle was conquered again, this time by the soldiers of the Walen.

This happened during the reign of the family Van Cortenbach who were not much interested in the Castle Helmond, mostly because its members lived on their sites in the southern Netherlands (today Belgium). Therefore, in the 18th century, they sold the Castle Helmond to the lower nobles of Utrecht. He renovated and re-arranged the castle and his heirs lived here until 1920, when it was sold to the city council. They established a city hall here. Since 1982 Helmond Castle does not serve as the town hall anymore, but still hosts weddings and other festive ceremonies.