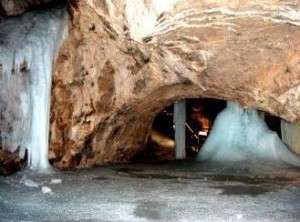 Demänovská Ice Cave is located in the entrance to the Demänovská valley in northern part of Slovakia, near the town of Liptovský Mikuláš. It includes the longest known underground system of Demänovské Caves. It was created in the dark-gray (guttenstein) Middle Triassic limestone, mainly by an underground river of Demänovka and is extended in four floors. The cave is also a part of the Low Tatras National Park.

The cave has three surface holes. The inlet lies at an altitude of 740 m, 90 m above the flow Demänovka. The upper floors are ice-free, with weathered limestone ornamentation. You can see the ice only in the front part of the very bottom floor.

Demänovská Ice Cave is one of the first known caves in the world. It was mentioned already in a document Ostrihom Chapter of 5th December 1299. It was first explored and described by Juraj Buchholtz jr. in 1719. Since then, it was well-known and sought out by scholars in the whole world. In 80′s of the last century, the cave was open also to public.

The basic admission is €7. Cave is open from May to September every day except of Mondays, however the opening hours are changing. For further details please check the official website of Demänovská Ice Cave.