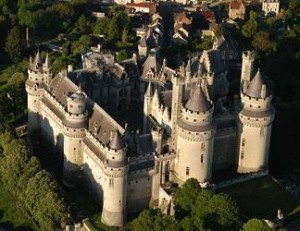 The old castle was built on the place of today’s castle in Pierrefonds already in the 12th century. This great military strength has undergone a number of refurbishment over the centuries as well as its owner changed frequently. In March 1617, during the troubled reign of King Louis XIII, the castle was conquered by troops of the Chief minister Cardinal Richelieu. He decided to demolish a castle. However thanks to a huge range of construction, the work of destruction was not completed. The roofs have been destroyed and the walls were devastated by the canons.

Pierrefonds Castle then remained as a ruin for the next two centuries. Napoleon I bought the wreck in 1810 for just 3,000 francs. In the 19th century began a period of fashion traditions of medieval knights. The ruins of Pierrefonds Castle were captured between 1834 and 1866 by the French painter Corot in his paintings.

The future French emperor Napoleon III visited the castle in 1850. Later, as emperor, asked the architect Viollet-le-Duc in 1857 to carry out reconstruction of the castle. The project grew and later they wanted to build a royal residence here. Viollet-le-Duc built it much under the influence of his ideas about the Middle Ages. The fort was changed to the castle. Yet as a builder proved very good knowledge of military fortifications of 14th century.