Muiden Castle – the most visited castle in the Netherlands 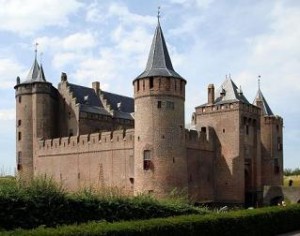 Muiden Castle (Muiderslot) is the most visited castle in the Netherlands. It is located near the capital city of Amsterdam.

The first castle on this place was built around the year of 1280 by Count Floris to secure the mouth of the river Vecht. In 1296 the Count was kidnapped, held captive and later killed, the castle was destroyed. A new castle here was built on the ruins by Duke Albrecht in 1370. At this time Muiden Castle was used as an aristocratic residence, served also as a court and state prison.

At the beginning of the 19th century the castle fell into disrepair, and for a while it seemed like the castle will be demolished and sold out for building material. But King Willem eventually didn’t allow demolition, and the castle was restored in 1895. In the years 1948-1972 Muiden Castle underwent reconstruction, which repaired some previous inadequate treatment. Today the castle serves as a national museum and a venue of many cultural events.

Pieter Hooft Corneliszoon
The most famous inhabitant of the castle was known Dutch writer, poet and historian Pieter Corneliszoon Hooft, who lived at the castle in the years 1609-1647. He was also a Knight in the Order of Saint Michael. Hooft used to invite other well-known artists here with whom he enjoyed and worked. The interiors of the castle are just surviving from this period. At the end of the 17th century Muiden Castle was integrated into a new and enlarged earthwork fortress .