The town of Sigulda – Latvian Switzerland 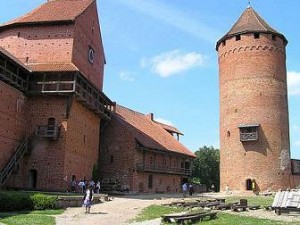 In the central part of Latvia you can find a beautiful and historically significant town of Sigulda. It lies on the southern outskirts of the picturesque forested valley of the River Gauja. This area is an ideal starting point for trips to Gauja National Park. For its beauty it is often called “Latvian Switzerland” by the local people.

The area of today’s town was settled by The Livs (Livonians) already in 2000BC. The Livs lived here until the 12th century when they build several wooden forts on the tops of the local hills. At the beginning of the 13th century they were not able to resist against German raids and left. In 1207 the land on the right bank of the river Gauja belonged to the bishop of Riga and the left bank to the Knights of Sword Order. Both sides have built castles Satezele (later destroyed) and Segewald in important places, which should protect them from the opponent. From the name of the second castle – Segewald is probably derived the present name of Sigulda.

In the period from the 16th to 18th century Sigulda underwent a number of wars, but the decline of this medieval city was noticeable already during Livonian Wars. The first one who conquered the castle Segewald was Ivan the Terrible. Sigulda fell to the Swedes in 1601 for a short time, who completely burnt it down during the retreat. Due to constant unrest and fighting Sigulda almost disappeared from the earth’s surface. The life returned back here in 1625 when the whole area fell to the Russians. Great development came up with the construction of the railway Riga – Valka – Pskov in 1889. In 1928 it was registered as a town of Sigulda and increasingly becoming a place where the rich families moved from St. Petersburg and Warsaw.

The recreation potential was not discovered until 1920-1930 – in a time of independent Latvian state. In 1935 there were registered 375 rental vacation homes in Sigulda. During the World War II many monuments and houses were destroyed and burnt. Recovery occurred during the Soviet domination between 1950 and 1962. The city gradually became a regional hub again. Today the town of Sigulda with 11,000 inhabitants is a small spa resort and also an important winter sports center. There is a short ski slopes with ski lifts and groomed trails. The river will satisfy all lovers of water sports, you can try also rafting here.

The main attractions of Sigulda are the ruins of Segewald castle on the northeastern outskirts of the town. From its walls you can enjoy a beautiful view of the other side of the valley, where is located Archbishop’s castle Turaida built of red bricks in 1214.

The nearby Gauja National Park was established in 1973. It covers an area of ​​917 km2 and is divided into five functional zones. Its most valuable parts are the reservations, in which tourists are not allowed. Under high protection is also the Gauja River valley, which together with the valleys of its tributaries, create a very nice landscape feature. Also, from a geological point of view it is a very interesting area.

View The town of Sigulda – Latvian Switzerland in a larger map