City of Kaunas – heart of Lithuanian culture, tradition and history 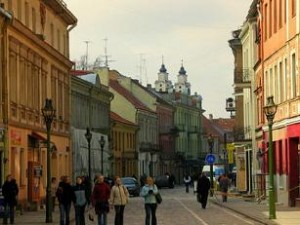 Modern and vibrant city of Kaunas with its 416 thousand inhabitants is the second largest city in Lithuania and became the cultural and industrial center of the Kaunas region. It is saved in the memories of local peoples as a bastion of post-Soviet mafia, but also has many advantages, which attract tourists from all over Europe.

Kaunas is located in central Lithuania, about 100 km west of Vilnius, at the confluence of rivers Neris and Nemunas, which are two largest rivers of Lithuania. According to a legend the city was founded by a son of two young lovers Milda and Daugerutis, who was begotten in a cave near the present city of Kaunas. Archaeologists are of the opinion that Kaunas was founded in the 13th century, but the first written mention dates from 1361.

Today Kaunas is an important shipping port, with nice architecture and many museums. The historical center is located around the square Rotušės aikštė. Vilniaus gatvė paved street is the main artery crossing the magical Old Town. In the 13th century, this street was even connected with the capital city of Vilnius. In the vicinity of this street you can visit the museum of folk music and instruments. Perhaps the most expressive building is the Cathedral of St. Peter and Paul from 1410, which has a baroque look. Inside the cathedral there are nine altars and the tomb of Kaunas’ priest and poet Maironise.

Do not miss the visit to remains of Kaunas castle, there is repaired tower, the walls and moat. The castle was founded in the 13th century and served as an important base on the western border of Lithuania.

In Kaunas there are nine view-points, which offer beautiful views of the Old and New Town.

View City of Kaunas – hearth of Lithuanian culture, tradition and history in a larger map