Bruges – Venice of the North | Belgium 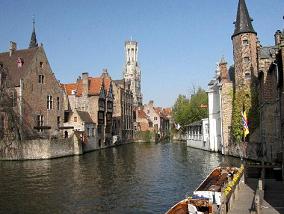 Belgian city of Bruges is often called “Venice of the North“. A number of canals cross the city and can even connect to other cities. Sailing boats on the canals of the river Reya has become a very popular tourist attraction like in Venice. The city has also a cultural and historical value and since 2000 it is inscribed on UNESCO World Heritage Site.

Bruges is the administrative center and the capital of the province of West Flanders, located in north-western part of Belgium. The city’s history dates back to about 9th century, when Bruges served as an important sea port for trade with England and Scandinavia. Around the 11th century the city experienced great prosperity and eventually became the commercial center of European importance. In 1127 the massive walls and moat were built around the city, which protected its inhabitants against enemy troops. A year later Bruges acquired city rights.

The brightest days of Bruges were in the 11th century, when it became the center of international trade. Even the first international exchange in the world was established here in a house of known merchant family Van der Beurs. It became a place where prominent merchants of that time, met here and bargained on the prices of goods loaded on ships.

The fifteenth century was a period of Art – painters Jan van Eyck and Hans Memling had their studios here. And then Bruges travelled through the political geography – it firstly belonged to Spain, then to Austria, France and Holland.

Now Bruges is not focused on international trade any more. It is a place with many cultural monuments. However it looks a bit sleepy, but it’s a pleasant sleep, which gives it an unforgettable atmosphere.

And then there’s the chocolate – with honey, marzipan, nuts and brandy. Pralines are sold on every corner and only true “barbarian” could miss these shops. But how to choose from those multi-shapes, ornaments and huge chocolate sculptures? You’ll find help in Praline Shop, just ask the sellers. You can also visit a Museum of chocolate or its manufactory Sukerbuyc.

View Bruges – Venice of the North Belgium in a larger map

« City of Kaunas – heart of Lithuanian culture, tradition and history
Madeira – explore beautiful nature in the Pearl of the Atlantic | Portugal »