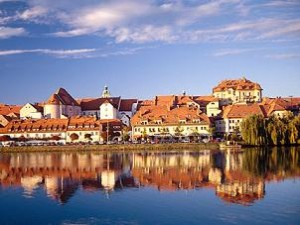 Maribor, with its 100,000 inhabitants, is the second largest city in Slovenia, after the capital city of Ljubljana. But it is the largest city of Slovenian part Styria (Slovene: Štajerska).

Basic information
Maribor is an important transport hub, especially for those travelling from Central Europe to Croatia or from Eastern Europe to Italy. But this city deserve more, not just passing through. There are galleries, museums and also the university, which was founded in 1961. But the main attraction is the four hundred years old, still nascent, grape-vine in Lent – the oldest part of the city. Through the city flows the river Drava, where you can try a traditional raft ride.

History of Maribor
Maribor originated from the village below the Markburg castle. It was first mentioned in 1208, the name Maribor is used only since the late 19th century. There is also a large railway junction (the oldest railway crossing Slovenia) and the highway to Zagreb, Ljubljana and Graz. Until the World War I, there was a large minority of Germans living in Maribor. But they had to leave after the first, and then also after the Second World War, so now the city is purely Slovenian.

Old Vine (Stara trta)
The old grape-vine on the banks of Lent was discovered during the renovation of the port. It was found that this forgotten grape is perhaps the oldest in Europe (three hundred to four hundred years old). Ceremonial harvest of these precious berries of wine is at the end of October. However the wine of this origin can hardly be bought. You could get it only as a present and only if you are really very important visitor to the city of Maribor.

Maribor’s Squares
Core central area of ​​Maribor includes the Main Square (Glavni Trg) and Slomškov Square (Slomškov Trg). On the Main Square you can see the Plague Column made by the sculptor Joseph Straub, which commemorate the tragedy of 17th century, when a third of Maribor’s residents died of black death. On the same square you can admire the old Renaissance Town Hall (Rotovž), through you can walk to Town Hall Square (Rotovški Trg). On the Slomškov Square you can see the monumental church and great facade of the classicist theater.

Lent International Summer Festival
Bank of river Drava, formerly a major port or residence of rafters and small craftsmen, is now a promenade with many cafes and restaurants. It is suitable for pleasant walks. Lent is also a place of the annual international music, theater and entertainment festival. It is held for approximately two weeks at the end of June.