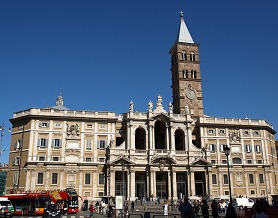 Basilica di Santa Maria Maggiore in Rome was founded in the year 420 on the site, that was addressed to some superior force. In the summer of 358 the snow started to fall here magically, and marked the platform of the future church. Now believers commemorate this event every year on 5th August.

Basilica di Santa Maria Maggiore is one of the four papal basilicas (Saint Peter’s Basilica, Basilica of Saint John Lateran, Basilica of Saint Paul Outside the Walls). It belongs to the most beautiful early Christian Basilicas in Rome, and became an important place of pilgrimage. It is also the largest church in Rome which is dedicated to Virgin Mary.

The Romanesque bell tower was added to the basilica in 1377 and with its 75 meters it is the highest one in Rome. At the turn of the 16th and 17th century, Basilica underwent a reconstruction. The basilica boasts wonderfully ornate interior. Richly painted coffered ceiling is supported with 40 massive columns, which were transferred here from the ancient Roman buildings. The beautiful decoration is everywhere you take a look. But the most breathtaking is a mosaic created between 1290 – 1295 by Jacopo Torritim. It is located in the apse, which is considered the top of medieval mosaic tradition in Rome. Other important mosaics come from the 5th century and decorate boat and triumphal arch. Mosaics on the side-walls show scenes of Moses, Abraham, Isaac and Jacob.

Once you are here, do not miss a visit to Chapel Cappella Sistina from 1585, which is a kind of church in the church. It is the work of Domenico Fontana, who created it for Pope Sixtus V. At the opposite side, there is the Cappella Paolina, built in 1611 for two popes – Paul V and Clement VIII. They tried to create a more beautiful chapel, than the opposite one, therefore it is overdecorated.