Salisbury Cathedral with the tallest church spire in the United Kingdom 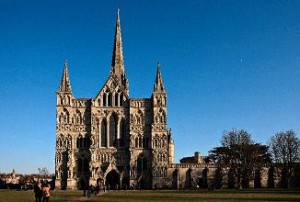 In the county of Wiltshire, south-west of England, you can find nice and well maintained small city of Salisbury. The pleasant impression was enhanced by the fact that it is not surrounded by skyscrapers and housing estates. There was also implemented an interesting system for the construction of new buildings – none of them can exceed the cathedral tower.

The city was founded in the early 13th century, when the bishopric was moved from Old Sarum, an ancient Iron Age fort, which now stands on the northern outskirts of town, about 3 km from the city centre. This place was inhabited already 5000 years ago. The double ditches of this fort are still visible, however there was nothing left from the city inside the walls. Old Sarum was settled by the Romans, Anglo-Saxons and the bishops of Sherborne. But over time, they seemed uncomfortable, as this place was plagued by drought and strong winds, therefore, they requested the pope to move to Salisbury. This city is still called New Sarum. In the 19th century Old Sarum had been completely abandoned.

Domination of the city is its Cathedral, which is situated in the beautiful and peaceful district of The Close. There are also located schools, hospitals, theological colleges and hostels clerics. Salisbury cathedral, also known as Cathedral Church of the Blessed Virgin Mary, was built between 1220 – 1258. Today it is a beautiful example of early English Gothic architecture, characterized by high lancet windows. The uniqueness of the cathedral is primarily in its perfectly uniform architectural concept. The only exception is a majestic tower that was built in the years 1280 – 1310. With its 123 meters it is the tallest spire in the United kingdom. It is quite surprising that the tower still stands, its foundations are only about 2 meters deep and the measurement found that the tower leans up to 77 cm.

But it is not everything that Salisbury Cathedral can offer. You can also see here the oldest working clock in the world from the year 1386, which are exposed on the left side of the cathedral. However the most important monument is the English charter Magna Carta from 1215, which is stored in the Chapter House. It is the best-preserved of the four surviving original copies of Magna Carta.

Salisbury Cathedral is famous also for its organ choir. The List of all Organists sorted chronologically in a row from the very beginning can not be overlooked in the cathedral. I must say that the cathedral has much to be proud of. I was lucky enough to hear the choir which was an amazing experience. I definitely recommend you to listen to (they do practice about 1 hour before Mass).

More info you can find at Salisbury Cathedral official website.