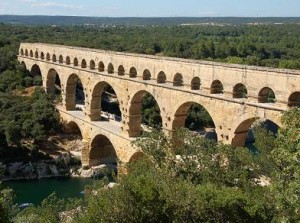 The basic requirement of life is water and regular water supply and its transport is an absolute necessity for a living. Since ancient times people knew this and tried to transport it as easy as it was possible to the human houses – so they began to build aqueducts.

Most impressive and largest aqueduct at that time was undoubtedly the Pont du Gard in Provence, in southern France. It dates from Roman times – was built 2000 years ago. It is not only beneficial structure, but also an architectural gem. It can certainly be called wonder of the ancient world. This building has been preserved almost in working conditions until today.

Aqueduct transferred water from the Eure spring to the wells in Nimes (48 km). Noteworthy is that the height difference between spring and wells is only 17 m, which proves truly outstanding calculations of the whole system.

A part of the aqueduct is a huge, three-storey bridge over the river Gard, which is also the most interesting part. The bridge is 275 meters long, 49 meters high and at the highest part it is 3 meters wide. It consists of three rows of arches – the arcades. Blocks of stone are embedded into each other with millimeter accuracy while no fasteners were used.

At the time of the Roman Empire the city of Nimes had approximately 50 000 inhabitants. Aqueduct was able to supply about 400 liters of water daily for each person.

The bridge is now a major tourist attraction and one of the most visited monuments in France with more than 2 million tourists per year. In 1985 it was included in UNESCO World Heritage Site.

You can even stay in camping which is situated right bellow the Aqueduct.