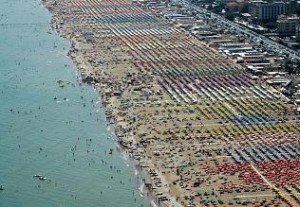 On the Adriatic coast in Italian region of Emilia-Romagna you can find one of the greatest seaside resorts not only in Italy but even in Europe. Rimini is a very popular destination where thousands of enthusiastic tourists are returning every year.

Rimini is located in an area known as Adriatic Riviera, which is famous for its endless sandy beaches and long gradual entry into the sea, which is appreciated especially by families with young children. The resort is situated on a flat sea coast in the southeast corner of the Po Valley, about 200 km south of Venice and 50 km from the historic city of Ravenna. Along with several other towns in its surroundings creates a long strip of the urban landscape.

The town has been here already since Roman period, which is reflected in the buildings in the city center. Rimini has received wider recognition in 1843 when the first spa resort was built here, which is still working. They deal with the treatment of musculoskeletal diseases and respiratory tract and are located in the northeast of the city. During the World War II almost the whole town was destroyed but it has been reconstructed during following years, began to grow and today it is one of Europe’s largest sea site resorts. The first hotel was opened here by Baldini family together with a spa centre in the year 1843. Since then there has grown additional 1600 accommodation properties.

Currently this resort can offer not only the sea, beaches, entertainment and attractions, but also nice old city with some beautiful and important monuments. So you can find a wonderful combination of nature, history, culture and entertainment here. Rimini has two faces – one is historic, great and calm in the same time, while the other one is trendy, vibrant and splendid.

Fans of medieval and Roman monuments will certainly not be disappointed since there are few of them right in the city center. One of the most important monuments is Ponte di Tiberio, a bridge that was constructed of Istrian marble. Its history dates back to the year 20 AD. Up to 90′s of the 20th century the bridge was used for transport, but now serves only for pedestrians. At this bridge, originating from the reign of Emperor Tiberius, starts the main street Corso di Augusto, which crosses the old city.

Following the street you can get up to the south edge of town where you can admire the oldest triumphal arch in Italy – Arco d’Augusto, which was built in 26 BC and served as the official gateway to the city. From the gate, then leads the main road Via Principalis.

The main square of Rimini is Piazza Cavour, which reflects all the city life. Its dominant feature is the ancient palace Palazzo del Podesta built in the 14th century. In front of it you can see the equestrian statue of the former ruler Sigismondo Pandolfo Malatesta. He was considered as one of the most daring military leaders in Italy of this time.

On Via IV. Novembre street you can see a Renaissance cathedral church Tempio Malatestiano, which is perhaps the most beautiful building in the town at all. It was built in the 13th century by architect Leon Battista Alberti. His work has subsequently become a jewel of Renaissance architecture. Old Town provides a pleasant rest from the otherwise bustling tourist center. You can wander the picturesque cobbled streets or relax in hidden corners and observe the life around.

But Rimini is mainly known for its busier environment and rich cultural program. It is an ideal place for those who want to enjoy an active holiday full of fun and entertainment of various kinds. So if you like a hectic shopping, crowded pizzerias, discos and bars, you should spend some time on the main street near the beach. In the dark the resort transforms into a center of wild fun. There are especially young people, who are enjoying the vibrant nightlife of clubs and discos until the early morning hours. Exuberant nightlife is the main reason why Rimini is often called “Ibiza of the Adriatic” among young people. However you will not be disappointed even if you are the lover of good food and drink, as you can sit in a comfortable environment of restaurants, pizzerias and bars.

If you will want a break from the hot Italian sun, go to cool down into the Adriatic Sea. Rimini has over twenty kilometers of beaches with golden sand, which is sometimes up to 200 meters wide. Although the sea is a little cloudy from the sand, do not worry about its purity. If you do not prefer sunbathing on the beach and just lying, you can try paragliding, windsurfing, water skiing or jet-ski. In addition to water sports Rimini offers also opportunities to play volleyball, tennis, golf, mini golf and many other sports you can think of. If you have roller skates, be sure to take them with you – Rimini offers several special in-line routes.

You can also spend some time in one of the many parks. The biggest one is the Parco XXV Aprile, where you can get from the street Dario Campana. If you are planning your vacation with children, it is better to choose accommodation in a quieter part of town, like Miramare de Rimini, where the beaches are not overcrowded and there are no fees. This is more quiet part than downtown, which you appreciate mainly during the evening and night hours. As the busiest part of town is considered Rivazzura.

Around the city there are many theme parks, e.g. Fiabilandia, but also the Dolphinarium, a water park and Aquafan underwater world. Perhaps the most popular amusement park is Mirabilandia – Land of Miracles. Among the frequently visited attractions is Italia in miniature, where you can see Italy’s most famous buildings in miniature.

In addition, only about 20km from Rimini you can find the second smallest state in the world – the Republic of San Marino, which is definitely worth a visit. So Rimini is a place where you cannot experience boredom, but unfortunately there is sometimes very hard to find moments of peace.