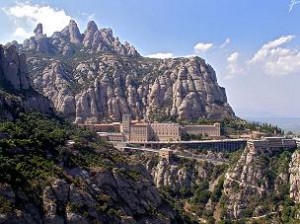 Each country has its landmarks, which are well-known to all the members of the nation and often seen as a kind of a national symbol. In Catholic Spain, respectively, in the Catalan part, the name of one of such landmarks is Montserrat – it is a name for both the Montserrat mountain and the Montserrat monastery.

The place is located close to Barcelona. Montserrat literally means “jagged mountain” and when you take a look at the pinkish rock, which is above the monastery and visible already from afar, you are immediately clear why. Although the mountain alone attracts many rock climbers, most people come here to visit the Benedictine monastery and see the statue of the Virgin Mary and infant Christ, also known as “la Moreneta”. The Black Madonna is made of wood and was created sometimes between the 12th and 13th century. Just like in many similar cases, even here a lot of people believe that the statue has supernatural abilities, such as cure or fulfil wishes. She was declared the saint patron of Catalonia by Pope Leo XIII in 1844.

But Montserrat Monastery is even older coming from the 8th or 9th century, however since then it has undergone many alterations and was almost destroyed during Napoleonic wars. Today’s appearance is from the late 19th century.

Some of you who knows the music much better than just from radios would certainly be familiar with a local boys’ choir of sopranos and altos called L’Escolania, existing since the 13th century. It is the oldest institution of its kind in Europe.

The monastery also includes an extensive library with more than 200,000 volumes. But it is still not everything. The legend says that this site was a place of the castle of the Holy Grail (often identified with the dish, plate, or cup used by Jesus at the Last Supper and said to possess miraculous powers).

Montserrat monastery is situated in the mountain at an altitude of 750 meters above sea level and formerly was very hard accessible. However now it is very easy to get there, so be prepared for crowds. You can use road, but also a steep lift built in 1930 (Aerie de Montserrat) or cog-railway from 1892.

Due to a huge number of visitors (almost 750,000 people a year), there are lots of car parks, restaurants, refreshments with ice cream, souvenir shops, two museums and even a hotel.