Ponte Vecchio in Florence – the world’s most beautiful bridge | Italy 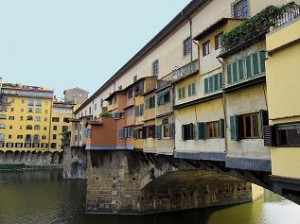 If you have ever visited Florence, you surely haven’t missed one of its distinctive sights – Ponte Vecchio. It is the only bridge in Florence that was not destroyed by the Nazis during the rout in 1944.

The river Arno flows through Florence and the bridges connect its banks in the narrowest point probably since Etruscan times. In ancient times Florence was situated on an important route the Via Cassia connecting Rome with the main cities of the north. Bridges were the only way to get across the river Arno. However due to flooding they had to be frequently renewed, but did not survive anyway and were torn down by floods completely. The present bridge was built in 1345 and Florentines gave it the name of the Ponte Vecchio, which means “old bridge”. They wanted to distinguish it from another one – Ponte alla Carraio. Although this bridge is much older (built in 1218), they already called it the Ponte Nuovo, the “new bridge”.

Ponte Vecchio was built by an architect Neri di Fioravante, who created an elegant building with three arches. Today, the Ponte Vecchio is also known as “The bridge of jewelers” because on its both sides you can find plenty of shops and boutiques, mostly jewelry. The first shops were open here in the 13th century, but originally there were fish traders, tanners and butchers. The river served them as an excellent dump. Above the second arch, in the middle of the bridge was therefore a small space available, through which they could throw garbage straight into the river. Fortunately this free space does not serve to its original purpose any more, but it allows a nice view of the river and other neighbouring bridges.

In 1593 Grand Duke Ferdinando I. kicked all the existing traders off the bridge and replaced them with jewellers and goldsmiths. About 50 of them settled in wooden shops and thanks to them the bridge got its distinctive character. Above the shops there is a Vasari Corridor which was built in 1564 by order of Grand Duke Cosimo I, who wanted to have sheltered and safe walkway from Palazzo Vecchio square to Palazzo Pitti. In the middle of the bridge you can see a bust of one of the most famous Florentine goldsmith, Benvenuto Cellini (1500 – 1571), created in 1900 by sculptor Raffaello Romanelli.

Ponte Vecchio can boast the title of one of the most famous symbols of Florence or the most beautiful bridge in the world.