There are many buildings that people consider important and significant, but only some of them have become symbols. One of them is undoubtedly the Roman Colosseum. It is interesting that the building was originally named differently and the name of Colosseum is relatively new. But more about that you learn later in this article. 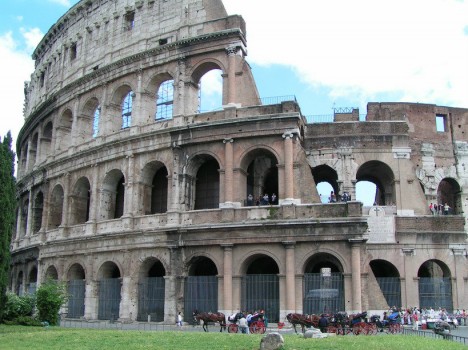 Colosseum dates back to 1st century AD. Specifically, its construction began sometimes after the year 70 during the reign of Emperor Vespasian and was completed in the year 80. Its further modifications followed at the end of the 1st century during Domitian rule.

Colosseum is monumental even today, can you imagine how monumental it was in those ancient times? The building, designed mainly for gladiatorial contests and various public performances, was the largest building ever built in the Roman empire. Colosseum could houses about 50 thousand people (according to the recent estimation but up to 87 thousand people according to an old document), which is astronomic number even today. Its length is 189 meters, the width 156 meters and height 48 meters, and covers an area of ​​6 acres. Unfortunately the building has not been preserved in full, but was destroyed by numerous earthquakes and other impacts. The current outer wall of the Colosseum was originally inside the walls, the original exterior one was 545 meters long.

But now let me return back to the name of the building. At the beginning it was known as Amphitheatrum Flavium (according to the emperors names – Titus Flavius ​​Vespasian and Titus Flavius ​​Domitian). And this name survived for hundreds of years.

Colosseum was used for almost 500 years for its intended purpose, until the 6th century (so more than 100 years after the collapse of Roman Empire). In the Middle Ages it served to various other purposes.

And how Colosseum came to its current name? Not far from it was a huge statue of the emperor Nero. Emperor’s followers variously rebuilt the statue into a god Helios, or they replaced his head with their own heads. Anyway, this statue was called “Colossus.” During the history, however, the statue disappeared and was eventually forgotten, now it just contains remnants of the base. But around the year 1000, for yet unknown reason, its name began to use for Amphitheatrum Flavium, whose original name was later forgotten as well.

However you call it, this is a remarkable work of ancient builders. It is estimated that its creation consumed more than 100,000 cubic meters of travertine and 300 tons of iron clamps (on Colosseum we can observe the decline of architectural skills – older civilizations were able to create even larger structures, but often held and still hold together without using ferrous fasteners). The amphitheater had a smart system of underground tunnels leading right under the arena (the hypogeum), which is now exposed and accessible to all the visitors. There were also other corridors leading in and out of the construction, or through other parts of Colosseum. It has even the elevators and hydraulically powered equipment. The amphitheater included also some other auxiliary buildings.

Colosseum is currently one of the most visited and most admired monuments not only in Rome but throughout Italy. Colosseum is certainly a symbol of the city but sometimes even a symbol of Italy.