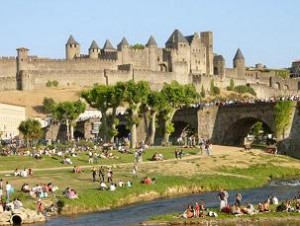 Carcassonne is a city with great history, admired by some people, cursed by others. It is also a theme of a great board game Carcassonne that is often played by many enthusiastic players. Let’s travel now through the places which inspired this game.

City of Carcassonne lies on the river Aude in the southern part of France. Carcassonne has a long history, there was oppidum already in the Iron Age, which was later transformed to the Roman city in the 1st century BC, and in the 11th century AD this Roman city was the strongest one in the county. Because the city was not controlled by church, Carcassonne soon became a haven for medieval intellectual elite.

Carcassonne was very open and tolerant city until 1659, when was conquered by the French and lost its position. Thus began the decline of the city, people left and Carcassonne deteriorated.

The medieval city centre is situated on a hill above the river. In times of decline of this old town there had grown a new town under the hill along a river.

The city centre was saved in the 19th century thanks to the reconstruction led by Viollet le Duc. This controversial architect reconstructed also Cathedral Notre Dame in Paris, which was his first work. Some people admire him for his extensive reconstructions which ensured France a lot of curious tourists that are coming here just to see his work. On the other hand, others disagree with the method of his work. Viollet le Duc just found an original fragment, and repeated it over and over again. The result is that the buildings are far away from the original form. Although the sights have typical signs, but those are not completely correct or at least not in such combination (e.g. respecting the original architect’s intent). But finally it is something unusual and tourists just love it.

The city centre is surrounded by walls, within which you can find a church, castle, museum and a labyrinth of medieval streets with shops and restaurants.

Sweet France offers visitors lots of different attractions and sights. One of the places worth visiting is the medieval city of Carcassonne. If you are going to the south of France or you are heading for the Pyrenees, do not miss this place, because here you can really feel the Middle Ages.

Once you are around Carcassone do not miss the Canal du Midi. It is a remarkable technical monument, which connects the Atlantic Ocean and Mediterranean Sea. The canal was built to ensure fast and safe transport of goods between ports in the Atlantic and Mediterranean Sea. The project dates from 1662 and its author was Paul Riquet. The canal was completed in less than twenty years after approval of the project and its construction employed 120 000 workers.

« Unique tent as a transparent bubble. Luxury with nature at your fingertips | France
Linderhof Palace – the beautiful palace in the mountain of Bavaria, Germany »