Linderhof Palace – the beautiful palace in the mountain of Bavaria, Germany 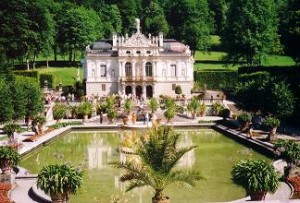 The idea to build Linderhof Palace came from the King Ludwig II of Bavaria while visiting the International Exhibition in Paris in 1867. Napoleon III took him to Compiègne, the Louvre, the Tuileries and Versailles. Ludwig II was so impressed of Versailles Palace that he returned to Bavaria and decided to build a replica of the Sun King’s palace (Versailles Palace), as an expression of absolute monarchy.

Construction of the Linderhof Palace began in 1870 under the leadership of Georg Dollmann and was completed in 1878 as a memorial to the absolute monarchy of the French kings. The castle was built in the Rococo style according to the style of Bourbon kings. Linderhof Palace is the only building constructed by Ludwig II. It was also his favorite residence until his tragic death in 1886.

The entrance hall is surrounded by a red marble pilasters, and there is an equestrian statue of Louis XIV. It is a copy of the statue from the Place Vendôme (square in Paris) which was made by Francois Girardon. Visiting a Palace is really a great experience, especially the Hall of Mirrors which is the most richly decorated room in Linderhof Palace.

The palace includes also the park with an area of ​​198 acres. There is even a waterfall and fountain with Neptune, or a classic circular temple with a marble statue of Venus.

View Linderhof Palace – the beautiful palace in the mountain of Bavaria, Germany in a larger map