Arbanasi – a picturesque village in Bulgaria 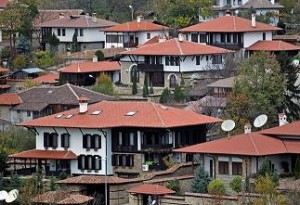 Bulgaria boasts many large cities to entertain and excite visitors but what about those who prefer something a bit more unpolished? Arbanasi is a picturesque settlement located in north central Bulgaria. It’s a popular tourist destination because of its historical buildings and also because of its proximity to Veliko Tarnovo, which is a medieval town on the Yantra River just 3km away. Arbanasi sits on a rocky plateau so offers some incredible views to the Tsarevets and Trapezitsa Hills. The village has some good hotels and restaurants for its tourists.
Arbanasi was founded in the 15th century by a Christian community and was the property of the Grand Vizir to the Sultan of the Ottoman Empire. As a result, a lot of the buildings in Arbanasi possess an Ottoman design and décor.

The village offers some fascinating 17th and 18th century churches, some of which contain ancient mural paintings and wood carvings. The churches in Arbanasi typically have strong, high walls, small windows and very strong oak doors studded with iron nails.

One of the earliest churches in Arbanasi is the ‘Nativity Church’ or the ‘Cathedral of Nativity’. Extensive studies have found that the church was built in three separate stages which presents some interesting structural characteristics. The main body of the church is divided into male and female sections and the whole building is decorated with murals. The Nativity Church is one of the oldest and best preserved churches not just in Arbanasi but across the whole of Bulgaria.

View Arbanasi – a picturesque village in Bulgaria in a larger map