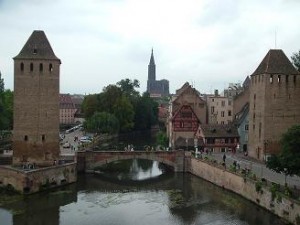 Strasbourg is a beautiful historic city and a seat of several important European institutions. Although its name is known worldwide, the most people mistakenly think that it is located in Germany. Finally, sounds like the German name and German influence is also evident at first glance.

Strasbourg is the capital and the largest city of French Alsace. Its name means “City of Road” and it is, of course, justified. Strasbourg has a strategic position within Europe and has always been a kind of crossroads, of which often fought mainly Germans and French. Wrangling lasted for years, once the city belonged to the Germans for a while, then again to the French for a few years, and so it went again and again. Finally, France won the battle and such the city belong to France today. But as mentioned earlier the German influence is evident here, from the street names through the meals in local restaurants up to the typically “German” half-timbered houses. But Strasbourg residents do not feel any injustice, consider that the city took the better of both countries – at first glance is a picturesque like the rest of France, but neat and clean like it would be German city.

In the distant past Strasbourg used to be a free city of Holy Roman Empire. Being a crossroad of trade routes and also an important crossing over the river Rhine, the city grew very fast. However in the following centuries it was quite difficult, as written above. During the “German” times, the city was a home to some important people, such as Johann Gutenberg (Johannes Gensfleisch zur Laden zum Gutenberg), who was forced to leave Mainz in the 15th century. Right here then constructed one of his first printing machines. A few hundred years later, famous German poet Johann Wolfgang von Goethe lived and studied here.

Strasbourg has kept the great importance in France and all over Europe until today. It is home to the Council of Europe, the European Court of Human Rights and also a place of regular meetings of the European Parliament. In addition, the buildings of these institutions are among the major structures of modern architecture. But Strasbourg has a lot to offer also in terms of historical sights. Along the river Ill you can see a lot of houses with gables, which dates back to the 16th century. Following century left a few half-timbered burgher houses here.

There are also historic gems such as Gothic cathedral and Rohan castle. Therefore “Grande Île” (Big Island) – which represents the historic center with cathedral, churches and palace has been inscribed on the UNESCO’s World Heritage List already in 1988.