In the northern part of Greece, at the border with Albania, there is one of the most impressive mountain ranges in the country, the mountains of Pindus (known also as Pindos or Pindhos). Pindus area has only few inhabitants and includes two national parks, the second largest gorge in Europe and the mountain peaks, which are among the highest in Greece.

Pindos massif composed of several separate mountain units (Smolikas, Tymfí, Aigo, Lakmos, Athamanon, Oros Iti, Karava and others). The highest peak is Smolikas reaching an altitude of 2637 meters. It is the second highest mountain in Greece, after Mount Olympus. 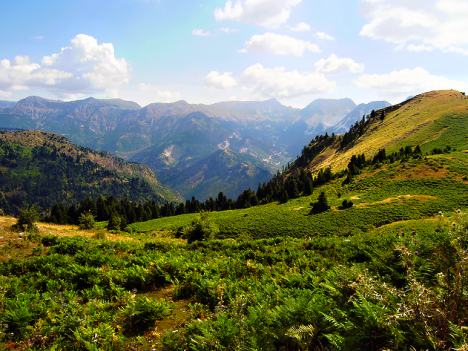 Photo licensed under the Creative Commons, created by dementia_inc

The Pindus mountain features two national parks that protect the original and almost intact nature. National Park Vikos-Aoos stretching over an area of ​​3360 hectares, was founded in 1973 and occupies an area around the Vikos gorge, characterized by its vertical walls, which often reach heights up to 950 meters. The gorge is 12 km long considered one of the greatest natural wonders. There are just several tourists here, so be aware of the fact that during the trip you can meet only a few people. The best time to visit the gorge is the beginning or end of summer, when water flows quiet.

There are two major rivers Aoös and Vikos, powered by a water from melting snow. They flow along the hiking trails, which are inaccessible when the snow is melting. A unique natural phenomenon in the area is 405 m deep Cave of Provatina and the nearby Chasm of Epos, where is an underground lake in a depth of 469 m. This area also includes Astraka plateau and Tymfí massive.

The larger Pindos National Park, which history dates back to 1966 is a home to the bears and wolves, deer, wild boars, chamois, wild cats and also snakes.