Książ Castle – one of the largest castles in Europe | Poland

Książ castle is the largest castle in Lower Silesia and the third largest castle in Poland (bigger castles are only Wawel Royal Castle in Krakow and the Crusader castle in Malbork). It is often considered the pearl of Lower Silesia. It lies in the county of Wałbrzych, among picturesque forests of Książ Landscape Park (Książański Park Krajobrazowy) and the valley of the river Pełcznica. The most beautiful view of the castle is from the terraces on so-called Giant Rock (Skała Olbrzyma), where you can get by following the broad path leading through the castle park. 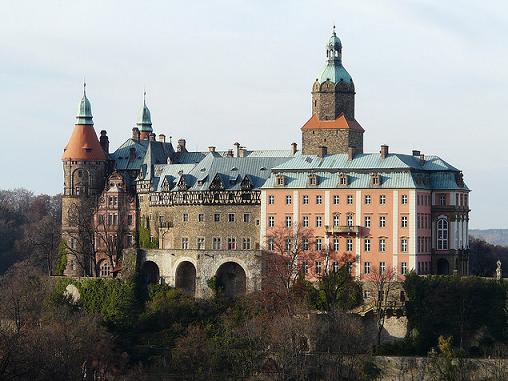 Photo licensed under the Creative Commons, created by Maciej Kasprzyk

The first written mention of the Książ castle dates back to 1288. It was one of several defensive castles built by duke Bolek I “the Cruel”. In 1508 Książ castle fell into the hands of John von Haugwitz, who sold it to Conrad von Hochberg.

Książ castle was rebuilt many times, so it combines many architectural and artistic styles – including the Gothic, Renaissance, Baroque and eclectic elements. The most beautiful part of the castle is certainly Maximilian Hall, which was used for concerts and theater performances, and its interior served as a setting for several movies.

One of the most important and also the most tragic periods in the history of the castle was the time of the World War II. In 1941 Książ castle was occupied by the Nazis. All the valuable works of art, furniture and contents of the castle library where took by Nazis. Many underground corridors were built below the castle, which proves that Nazis prepared here one of the seats of the German dictator Adolph Hitler.

Książ castle combines the history of several nations and many people. In addition to the standard attributes of building castles like beautiful gates, bastions and towers, also hundreds of undiscovered secrets are waiting here for the visitors.

The castle is open daily except for Mondays from 10:00am to 3:00pm (extended in Summer and weekends). You can attend several routes, the basic admission is 20PLN (€5).

For further details visit the official website of Książ castle.