Selinunte is one of the most important archaeological sites in Sicily. The locality is famous for its spectacular ruins of the ancient Greek city. It was founded in 628 BC by Doric settlers from Megara Hyblaea. It was demolished several times due to the long-term conflict with Carthage and Segesta, and finally destroyed by the Carthaginians in 250 BC. Since then it is devastated.

Archeological site is located west of the railway station Selinunte and consists of two areas: Templi Orientali (Eastern temples) and the Acropolis. Tour through the locations takes 2-3 hours. 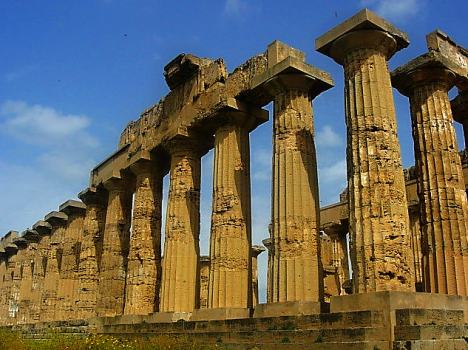 Photo licensed under the Creative Commons, created by Chiara Marra

The first area includes three temples, which probably originally had a common protective wall. North Temple, situated at the entrance to the complex, was one of the largest Greek temples ever (113x54metres). Construction began in 550 BC but due to a continuing war threats, the temple was never completed. Only one column survived of the originally 46 columns. On the opposite, southern side of the road leading to the acropolis, is another temple (66x27metres), built between 560-540 BC. It had originally 30 columns. In the purest Doric style is built its southern neighbor (the early 5th century BC). It measures 70x28metres and is reconstructed, so we can admire its 36 columns (four beautiful metopes are stored in the National Museum in Palermo).

From these three temples, you can follow the 1.8 km long winding road leading along one of two Selinunte’s ports to the acropolis. During the way you pass the remains of two other temples that were built in 490 to 480 BC. Then you can find there the Hellenistic temple (the largest and oldest temple in this area, 64x24metres). It dates from the mid-sixth century BC (42 columns of the original 12 left, three metopes are in a museum in Palermo) and finally the last temple (56x24metres) from the years 570 to 554 BC. Furthermore there are the remains of ancient dwellings in the neighborhood. At the northern end of the Acropolis you can see the remains of the former main gate of the ancient fortifications. About a mile away there are the ruins of the Sanctuary of Demeter Malophoros and the remains of three other shrines.

Today the village of Selinunte is a small fishing village with nice beaches.