Just a few kilometers from the Czech borders, about 20 km west of the Slovakian capital Bratislava, on the way to Vienna, lies the small towns Petronell and Bad Deutsch-Altenburg. There was, in the times of the Roman Empire, located a legionary camp and a capital of the province of Upper Pannonia – Carnuntum. The city was strategically located on the Amber Road – an ancient trade route for transferring the Amber, connecting North and South of Europe.

The city is mentioned for the first time at the beginning of our era, during the reign of emperor Augustus. The city was the base for Roman troops. Even the Emperor Marcus Aurelius stayed here for 3 years (172-175), during Markoman Wars. The city was destroyed by the Germans in the 4th century and Valentinian I. tried to restore it. But the city has never achieved such fame again and later, in the Middle Ages, was completely destroyed by the Hungarians. 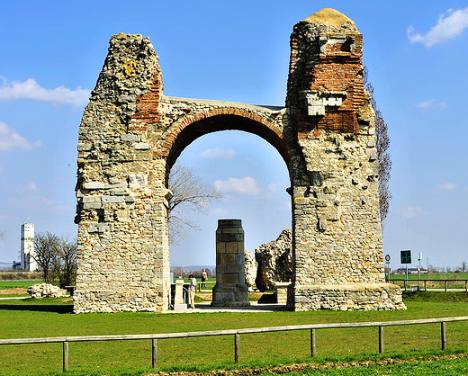 Photo licensed under the Creative Commons, created by Ulrich Latzenhofer

Now it is possible to visit the Archaeological Park Carnuntum in 3 different parts: Civilian part, Military part and Museum Carnuntinum.

The civilian part
The first is the civilian part, which are the foundations of the former city and several reconstructed buildings, amphitheater and Heidentor (Pagan Gate). Everything is located on the western edge of Petronell. Refurbished buildings – public baths and dwelling house – were reconstructed using the methods that were typical for the Romans. The park area is such an interesting mix of the excavated ruins with renovated Roman buildings.

A few minutes walking from the excavated ruins you can find the amphitheatre, which at that time can serve for up to 15,000 people. Reportedly it was the fourth largest amphitheater in the Roman empire.

Then you can see Heidentor – Pagan Gate. The monumental gate, which was located at the entrance to the fortification of Carnuntum. At the middle of it is a statue of Emperor Constantine II., built between 354 and 361.

The military part
The military part of the city contains only the ruins of the second amphitheatre, located on the outskirts of the town of Bad Deutsch-Altenburg. This amphitheatre was special because it could be filled with water and so there could be even naval battles. There is now also a small gladiator museum.

Museum Carnuntinum
The museum is also in the town of Bad Deutsch-Altenburg, a few meters from the shore of the Danube river. Here you can see the most interesting excavations of the area.

Museum is opened daily from 16 April to 15 November 2011 at 9.00 to 18.00 and the basic admission is €9. For further details visit the official site of Open Air Museum Petronell-Carnuntum.