Cologne Cathedral – one of the best-known architectural monuments in Germany

Close to the left bank of the River Rhine rises a massive construction of Cologne Cathedral (Kölner Dom). It is a Gothic cathedral built in the French style. It is a symbol of the city of Cologne and one of the largest cathedrals in Germany. More than a hundred columns support an extremely steep arch with the amount of colored light windows. The most valuable treasure is a magnificent reliquary of the Three Kings containing the relics of the Holy Three Kings. More than 500 steps leads to the South Tower, where you can enjoy a unique panoramic view of the city. 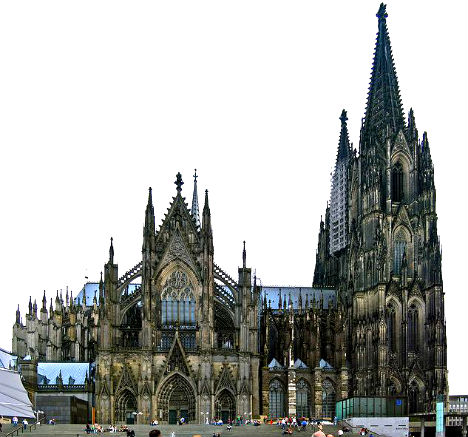 The cathedral was built over 600 years. Its eastern part with the chorus and part of the two towers were built in the year 1300. In the 15th century there was added the second floor to the south tower where was placed a bell. Towers were connected with the chorus through a long low building. Cathedral, as we know it today, was built in the 19th century of neo-Gothic style.

Everything that was newly built since 1842, was built according to the original medieval plans.