Seville Cathedral, known also as The Cathedral of Saint Mary of the See (Catedral de Santa María de la Sede) was built on the site of the Grand Mosque, but its architect left the minaret serving as a belfry and the Patio de los Naranjos as unusual paradise garden. Construction of the Seville Cathedral began in 1402 in Gothic style according to the model of French cathedrals. It is the third largest cathedral in the world, just after St. Peter’s Basilica in Vatican City, Rome, and Basilica of the National Shrine of Our Lady of Aparecida in Brazil. It is 130 meters long, 76 meters wide, contains 140 massive supporting pillars and 93 huge windows, thousands of figures and statues of marble, iron, wood and stone. There are domes, altars and tombs. 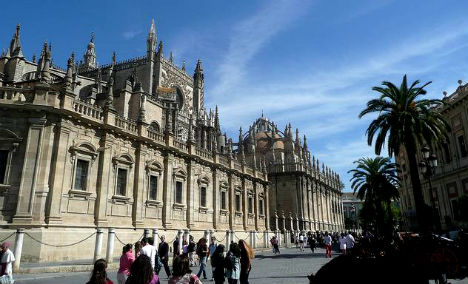 Photo licensed under the Creative Commons, created by Tom Anderson

Five naves cathedral rises to a height of 36 meters and there are also 45 side chapels. Most important element in the interior is incredible golden altar Capilla Mayor containing the biggest altarpiece in the world. At its 220 m2 containing more than 1000 figures depicting the biblical history worked 26 artists.

Its middle part was completed in 1521, side parts in the years 1550 to 1564. The altar consists of 45 paintings of the life of Christ and the Virgin Mary and is accompanied by paintings of the major Saints of Seville. Capilla Real (Royal Chapel) was built at the north-east corner in the years 1551 to 1575. There are tombs of prominent ruling figures of Seville like Alfonso X (King of Castile, León and Galicia) and his mother Beatrice of Swabia and Holy Roman Emperor Charles V and his mother. There is also a symbolic tomb of Christopher Columbus from Melide Arthur, which was moved here in 1899 from Havana. Patio de los Naranjos is the only paradise garden of the cathedral. In the middle of which you can find a fountain from Visigothic cathedral.