The city of Guimarães lies at the north-western part of Portugal in the province of Minho. It is considered the cradle of the Portuguese nation. Right here was born the first Portuguese King Alfonso I. The historic core of the city has been for its uniqueness inscribe to Unesco World Heritage Site in 2001. 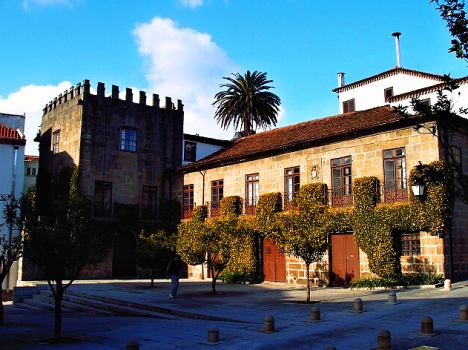 Photo licensed under the Creative Commons, created by am_

Guimarães, which is reportedly the oldest city in the whole of Portugal, was built in the middle of slightly hilly landscape. In 1139, Alfonso Henriques proclaimed himself king Alfonso I. and chose Guimarães for his royal seat. Although the capital city of Portugal moved quickly to the city of Coimbra and the seat of a king to the city of Porto, Guimarães remained forever a birthplace of the nation. The proof of the city’s importance is the characteristic shape of the local castle, which appears on the Portuguese coat of arms in the middle of the state flag.

The city center is full of the narrow medieval streets that are lined with shops and cafes and invite you to a pleasant walk. The oldest street is Rua de Santa Maria, which is paved with cobblestones and decorated with the old houses with ornate statues. It leads from the main square, Largo da Oliveira, along the palace Paço dos Duques up to the castle. This is the biggest tourist attraction of the city.

Castle Castelo de Sao Miguel is composed of huge square castle tower, which is surrounded by eight smaller towers with battlements. It was built in the 10th century to protect the city against attacks of Moors and Normans. About 200 years later, it was spread thanks to the initiative of Henry of Burgundy. According to the legend, Alfonso I. The chapel inside has a mysterious character because the floor is made of gravestones of the first Portuguese kings and their ancestors.

During your visit you should not miss a visit to the charming church of São Francisco, which was built in 1400 in the Gothic style.

City of Guimarães is also known for its football club Vitória de Guimarães. The stadium is located in the northwestern part of Guimarães and is quite large in comparison with the city. Forests surrounding Guimarães consist mainly of non-native eucalyptus. The current population of the city is more than 52,000 inhabitants.