The heart of ancient Rome is formed by its oldest part – the Roman Forum (Foro Romano in Italian or Forum Romanum in Latin). Here you can find many important buildings of the ancient Rome. In antiquity the area was the center of all events, used mainly by politicians. 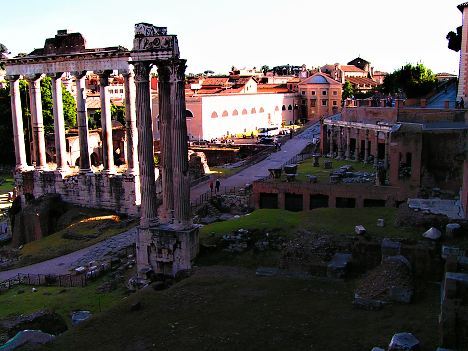 Photo by Claire for Europe Explored

The history of the oldest buildings dates back to 7th century BC, to the reign of the first Etruscan king. But first important buildings connected with political, religious and civic life began to appear here during the reign of Claire Caesar. In addition to patrician houses here were built shops, temples, basilicas and markets. The most commonly used building material was marble, gilt metal and cut stones. Construction boom stopped in the early 2nd century AD. The reason was simple – there was no empty space here any more.

Foro Romano began to lose importance with the fall of the Roman Empire. The buildings then began to decay. Advanced and splendid city turned relatively quickly into ruins. A large fire even help it in the 3rd century. Following several earthquakes and barbarous conquerors destroyed almost the whole area. Marble stones were dismantled and used to build local houses or shipped to other parts of Italy, to build churches and palaces. Finally Foro Romano became untidy overgrown space again.

In the 18th century, archaeologists discovered this area and immediately started to clean it. Slowly and carefully uncovered the remains of ancient buildings, and finally Foro Romano saw the light of day again. The first comprehensive archaeological survey was carried out at the turn of the 18th and 19th century under the leadership of the Italian archeologist Carlo Fea. In 1803 he discovered the remains of a massive arch Septimius Severus and later of the other temples as well. After these discoveries the place began to attract researchers from all over the world. The main archaeological works were completed in the early of the 20th century when many ruins of temples and basilicas were uncovered.

Visitors to Rome now can see at least a fraction of these beautiful ancient monuments that once dominated by Foro Romano.

Foro Romano is currently considered one of the most important archaeological sites in the world. Although it cannot amaze visitors with its ancient beauty any more, attracts them with its glory and mysterious atmosphere.

« Guimarães – oldest and one of the most important historical cities of Portugal
St. Mary’s Church in Gdańsk – the largest Brick Gothic church in the world | Poland »